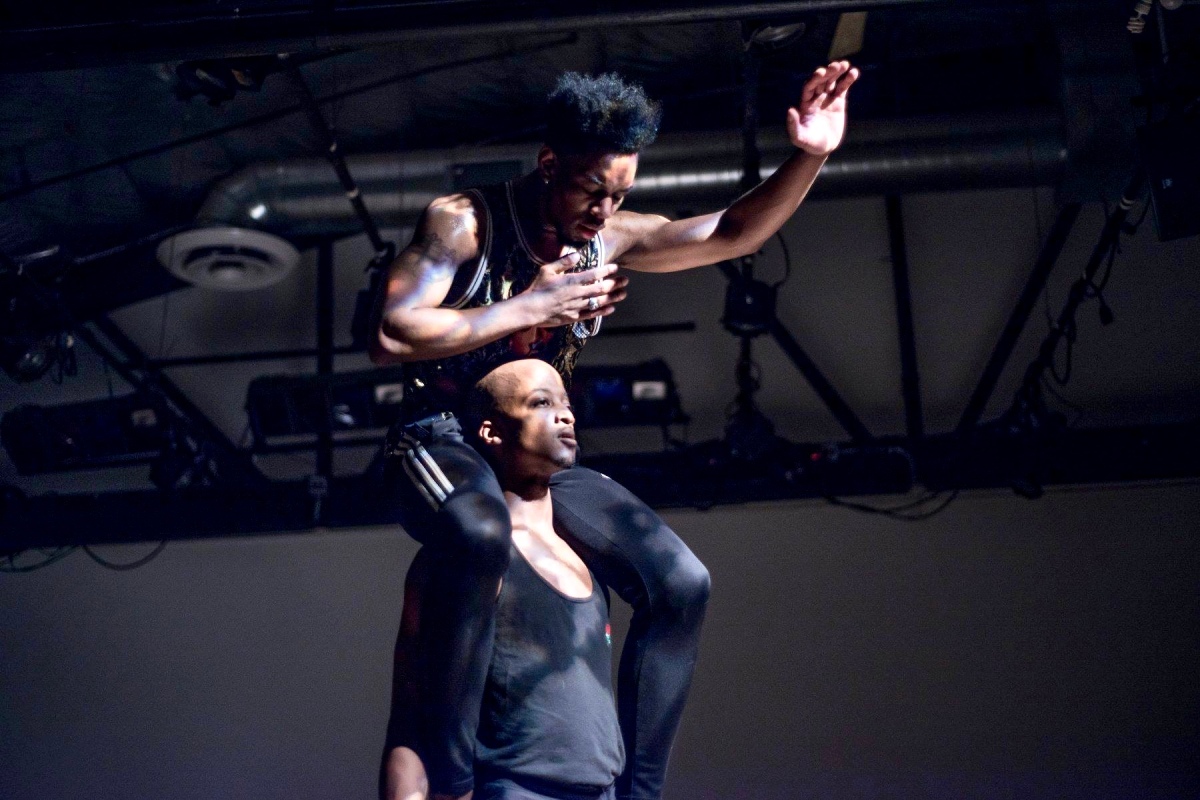 created with and performed by Solomon Bowser, Dedrick Gray, and Jared Brown

Saturday January 4, 2020…Two weeks prior, I received an email from my friend & fellow artist J’Sun Howard, inviting me to attend and review the closing night of his latest choreographic opus, aMoratorium. I was truly flattered by J’Sun’s invitation because it signalled that he not only valued my artistic and cultural perspective as a Black artist-slash-arts programmer but that he also recognized and valued my unique perspective as witness to the various WIP iterations of this visceral work. As J’Sun stated on his 2019 3Arts crowdfunding page, “For over a year and in different iterations, I have been collaborating with dance artists Solomon Bowser, Dedrick “D. Banks” Gray, Damon Green, and Orlando DeLeon to develop aMoratorium, a response and tribute to visual artist Charles Wilbert White. With a primary focus on Black male identity, visibility, temporality, and its absence, the piece also examines death as it relates to the Black church and Black spiritual traditions. aMoratorium is important to me because I have been ruminating on the fact I have been doing creative work in Chicago for nearly twenty years. I want to celebrate this by continuing doing something I love and making a tribute to a Chicago artist whose work resonates with me on many levels.” The Reader’s Irene Hsiao also wrote in her January ‘dance picks’ preview, “Invited to make a work for the Art Institute, choreographer J’Sun Howard found himself drawn to portraits of struggle, resilience, and joy in the works of Chicago artist Charles Wilbert White, who was determined to create “images of dignity” that document Black history and culture. Mourning lives lost and damaged by police violence, aMoratorium creates space for “generous, compassionate, loving play between Black men.”

J’Sun’s work/work ethic continues to resonate with me on many levels. Knowing the inspiration (and perspiration) behind the development of aMoratorium, I was particularly eager to witness this ultimate version in Steppenwolf’s experimental black box: the LookOut stage. The space was beautifully suited for this intimate-yet-expansive 50-minute work. *NOTE: Speaking of “expansive”, I have to mention that attending art therapist veronica precious bohanan’s personal development workshop – “Sis, U Belong Here: Manifest” – was the perfect way for me to spend the new year’s first Saturday afternoon, as well as being a fitting prelude to attending aMoratorium that same night. The workshop served as a would-be bookend for my experience to come–Not only am I intimately familiar with veronica’s work and work ethic, but her careful/ playful/ intentional and nuanced curation for/by Black women mirrored J’Sun’s fundamental artistic narrative of centering/honoring/celebrating of the Black male experience in America. #kinetic #celebratory #unapologetic #free…

Closing night was a full house, which included several players from Chicago’s experimental performance community–folks whom I either have or will see present there. aMoratorium’s Dedrick Gray and Solomon Bowser are amazing, mesmerizing dancers!

They are both so powerful/ graceful & precise, but their solos truly showcased the delicious distinctions in their embodied storytelling. Generally speaking, Deddy’s approach amplified a grounded/ percussive West African aesthetic whereas Solomon denoted a sinewy/ yogic approach to the choreography. As Chicago-based dance writer/ performer Brianna Heath observes in her review, “Bowser and Gray both offer their bodies as conduit for spirit, mixing the heat of social dance with the exuberance of praise”…Amen, Ashe.

For the Steppenwolf world premiere, J’Sun recruited lighting designer Jacob Snodgrass and movement artist Jeff Hancock on costume design. Each of those elements beautifully/ unobtrusively enhanced the show’s narrative and production value. However the addition of sound artist/ radio host and Chicago native Jared Brown to the cast was a stand out innovation, for me.

Although the show’s soundtrack remained largely unchanged from the initial WIP showing, Jared’s live production & mixing of the soundscape served as the show’s scrumptious sonic seasoning– a vital emotional/ temporal catalyst, just as it was surely meant to be. *See complete aMoratorium tracklist & show sequence below.*

The first performance I attended in 2020 was aMoratorium and I’m very glad that my New Year’s plans changed so I could, once again, bear witness to this Black Boy Joy.

Every Nigger Is A Star – Boris Gardiner

Godhead: at that altar, it may not be my time

Lifelong Chicagoan/artist and Prince “fam” Felicia Holman is an independent cultural producer/programmer/writer, as well as a co-founding member of Afrodiasporic feminist creative collective, Honey Pot Performance. As both artist and producer, Felicia presents and supports innovative interdisciplinary performance that engages audience and inspires community. Some of her recent projects include:

*Featured artist in Jenn Freeman’s “The People’s Church of The G.H.E.T.T.O” and Erin Kilmurray’s “The Fly Honey Show 10“.

Felicia relishes her dynamic artrepreneurial life and sums it up in 3 words—’Creator, Connector, Conduit’.