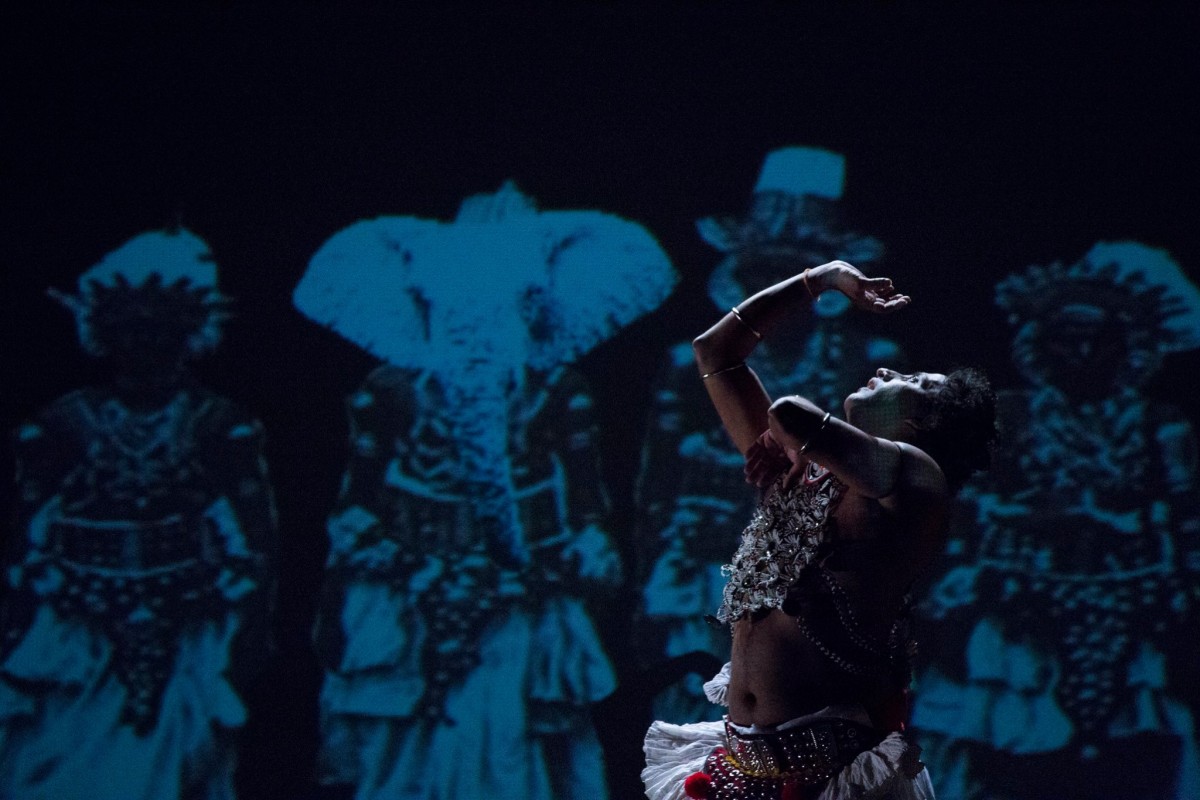 The night began with a gathering. Mandala Arts introduced a cultural exchange dating back over a century with the reimagining the Chicago’s World Fair of 1893, also known as the “Columbian Exposition.” They initiated the experience as an attempt to reclaim the agency that most performers lacked during the Fair. A pendulum of events transpired as Sri Lankan artists collaborated with Chicago’s very own Ayodele Drum & Dance, Bucket Boyz, Rika Lin/Fujima, Khazna Khalil & the Mandala South Asian Performing Arts ensemble. Each group respectively represented traditional Sri Lankan movement, West African dance technique & drumming, classical Japanese dance, Middle Eastern bellydancing, and contemporary traces combined with traditional Bharatanatyam.

Sudesh Mantillake led the Sri Lankan artists in a ritual that carried the journey of movers and players. They began with a circle dance; almost a call & response between dancer (Mantillake) and drummers. Mantillake played with the viewer as he wielded a large mask up, down and around his face. He performed comical and ironic gestures with the mask. The irony came from his expression of slight derision to the viewers who may not value the work ethic and artistry of their folk dances.

At the end of September I attended a small introduction to the Sri Lankan artists at the Back of the Yards Chicago Public Library. Mantillake explained that because viewers from Western civilization did not understand the values and traditions of the eastern performers at the World Fair, they called them “devils” or “devil dancers.” This implied that their traditional forms did not align with the overall standards held by conservative patrons of the United States at the time. He went on to explain the symbol of dehumanization that the masks brought to Sri Lankan artists in 1893. The reclamation of the mask and its role in the performance and ceremony of their dance(s) inspired Mantillake to use the mask to create a whimsical display.

As the dance continued, artists representing West Africa, the Middle East, the Far East (Japan), and even Southside Chicago traversed across the stage and performed alongside Mantillake. They ritualized their movements as he converted them to the Sri Lankan style. The Sri Lankan style reminds me of traditional Bharatanatyam, but without the heavy emphasis on the feet and eyes. There were even moments when I connected some of the jerkiness in the arm movements to popping and locking in Hip Hop. My mind whirred with the intricacies between the Sri Lankan drummers and the West African drummers. Of course, they played different drums, but the cadences and acoustics they created drew me in in much the same way.

I recognized, however, that I could not quite catch the rhythm—within myself—of the Sri Lankan drummers. Their playful banter between each other revealed the natural element to the showcase of their percussive skills. Mantillake mentioned the commonality of drummers challenging each other in rituals to highlight each other’s skills while also competing in a healthy back-and-forth.

The night opened up when Chicago’s very own Bucket Boyz made an appearance. The Bucket Boyz are known around Chicago, especially Downtown and the Southside, for performing synchronized drumming sequences on the backs of buckets with drumsticks. They’re avid street performers who never cease to draw a large crowd from multiple backgrounds and interests. Three men sat on crates and exhibited a quick and precise arrangement filled with heavy hitting rhythms making my heart beat to their unison sticks and had me bouncing in my seat. Once they completed their own set, the Sri Lankan drummers joined them. What can only be described as a “percussive tour-de-force” commenced. The collaboration between artists from opposite sides of the world linked up in a way that cannot be unseen or unheard. I heard their rhythms in each other. I felt their rhythms fuse in my chest and hands.

Then a shift occurred. A night that had seen Sudesh Mantillake take on styles from West African to Ballet to Bellydancing, suddenly introduced the Mandala Arts Ensemble with choreography and dancing led by Ashwaty Chennat. The ensemble danced without the drums that we had gotten so accustomed to in the first half of the evening. Instead, they danced to a soundtrack including traditional South Asian synths with contemporary guitar strings and soundboard beats. Each dancer offered their own style within Chennat’s choreography. I noticed the contemporized Bharatanatyam elements along with peeks of capoeira, modern, ballet, and lyrical. The night came full circle when the dancers indulged in a moment of improvisation with the reintroduction of the Bucket Boyz and the Sri Lankan drummers. They created a semicircle, facing out to us in the audience, and satiated themselves one after the other. It almost read as clumsy, but with the impromptu vibe of it all, I could forgive.

Aaliyah Christina curates, moves & writes in Chicago, IL via Ruston, Louisiana. She graduated with a B.A. in dance from the Dance Center of Columbia College Chicago in 2016. She specializes in dance improvisation and curating tranquil and welcoming spaces for her burgeoning Chicago communities. She’s performed under artists like Darling Shear, Onye Ozuzu, Kristina Isabelle, and Darrell Jones. She has also lended her curatorial passions to Chicago Dancemakers Forum for Elevate Chicago Dance 2018. She founded and created Catalyst Movmnt (2017), a curating collective designed to highlight emerging movement artists and dancemakers of color.