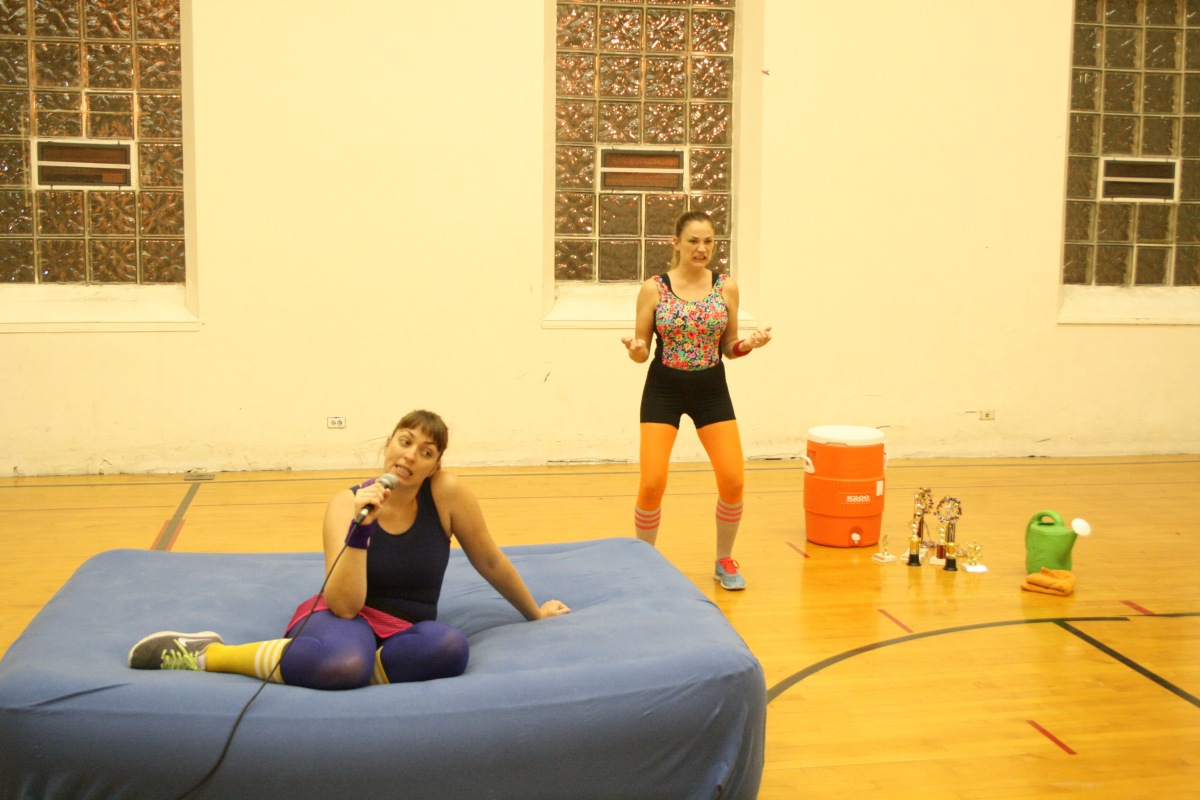 Here are some things that I remember about while our blood’s still young: a lecture on tectonic plates, a Roman god running home to die, an air mattress deflating, chariots of fire and a water cooler dump, Jane Fonda on vinyl, lightbulbs swung around like lassos. There was a dance to a song from 2008, but outfits from ’88. An extended section for selfies. Carboloading with a kiddie pool full of spaghetti. A spiderweb of images and ideas, all circling exhaustion. Exhaustion of the spirit. Exhaustion of the mind. But especially: Exhaustion of the body.

while our blood’s still young was performed and created by Genesis, an ensemble of two: Lindsey Barlag Thornton and Amanda Dunne Acevedo. Most recently, Genesis has been a project of curation, but now Lindsey and Amanda have turned their efforts toward a duo show. They were joined onstage by McKenzie Gerber (Mac), a stage manager who doubles as referee, but most of the talking, running, dancing, jumping, and yelling is done by Lindsey and Amanda. And there is a lot of running. And jumping. And yelling.

(Let it also be noted that I am not an impartial viewer. I am friends with Lindsey and Amanda and Mac. I helped them with this show by making an audio file for them. The file took me ten minutes to make. I have 10 minutes of skin in this game. I don’t think that makes me a less qualified viewer, but also, you know, conflicts of interest. Transparency.)

This is a piece about exhaustion, and an honest exhaustion at that — the duo starts an aerobic workout a full 35 minutes before the performance begins. You walk in to take your seat and you can see them. They do sit ups for a time, then move on to jumping jacks. None of it is particularly precise. Loud workout music. I think the Rocky theme played?

while our blood’s still young was presented in a space built for theatre, but the piece revealed itself as something more complicated than theatre. Something close to performance art. Maybe in Europe they’d call it Dance-theatre. Realism? But a kind of realism that you don’t often see in these spaces. A realism with a rejection of artifice. Lindsey is Lindsey. Amanda is Amanda. The activities are real, the bodies are real, the sweat (very clearly) is real.

To start the show someone from American Theatre Company walks out onstage to talk to us about the Residency Program (an incredible thing, you should check it out) and behind the ATC rep: Lindsey and Amanda doing, of all things, leg lifts. The lights go down. We wait for them to catch their breath. They begin.

There are a lot of things that happen during the next hour. It seems fruitless to give you a list of events, so here is a moment: There is an air mattress on stage. Amanda lies down with a microphone and talks to us about tectonic plates. It’s a little bit like a lecture, but more like someone trying to tell you about a cool youtube video they watched. Her speech is meandering, filled with rough emotional sketches of the facts. (Isn’t it cool that the world sits on rocks sitting on liquid fire?) While this is happening: Lindsey is somewhere between Rocky Balboa and Vanna White. She runs to the back of the stage, unfolds a piece of paper with a task on it (push ups, fall down and get back up, throw a tantrum), runs to the front of the stage and performs that task over and over while Mac times. Mac blows his whistle after a minute? Thirty seconds? It’s hard to tell how fast anything is moving. After the whistle blows, Lindsey runs back to unfold a new piece of paper. It’s loud, chaotic, confusing, exciting (but hard to follow). I found myself bouncing back and forth between the two performers. Amanda for types of tectonic collisions, Lindsey for sit ups, Amanda for where Illinois sits on one of these plates, Lindsey for stair climbing, Amanda, Lindsey, back again. A whistle blows. Why tectonics? I’m not sure. But it’s interesting. Two things rubbing up against each other. Rocks and rocks. Or: rocks and Lindsey’s workout. I don’t know what the point is, but I’m not too concerned with that. It’s visceral. It’s disorienting. It’s also entertaining.

And let me articulate this: the whole piece is remarkably fun. It gleefully celebrates the pain and limits of bodies. Lindsey and Amanda make fun of themselves, make fun of Mac, make fun of the whole game itself. And so, often I found myself laughing at the absurd reality and relatability of it all. Lindsey cannot do a single decent pushup. I can’t either and that feels joyous. It plays to some part of me that loves competition, loves to watch people try to beat stopwatches, beat limits, fail at that, try again. It is a game, performed with a smile, or a wink, or a desperate glance from behind a wall of sweat and pasta.

(Talking to Amanda after the show: “I was changing and reached into my sports bra and kept pulling out wet spaghetti noodles.”)

Another moment, deeper into the piece: The stage is dark except for two lightbulbs plugged into extension cords. Lindsey and Amanda start to swing the lightbulbs overhead. Like a lasso, maybe. They run in place. It’s beautiful — something like a torch, something like a lighthouse, something like you’ve never seen before. Amanda speaks. About watching the Rio Olympics and seeing the team of refugees. Hearing the story of one in particular: Syrian. The boat’s motor fails. Swims for three hours pushing the boat to land. Is now at the Olympics. Lindsey and Amanda stop running, unplug the lights.

How to make sense of this? How to make sense of these things being pushed together? A Syrian refugee does something seemingly impossible and, at the same time, Lindsey and Amanda not thirty minutes ago ran up and down the stairs of the space, faces flushed. Within the scope of the whole world, our exhaustions feel incredibly small. And this gets to a central rift at the center of the work — the word “exhaustion” is not especially particular. It encompasses absolute depletion, mild frustration, weariness, lethargy, complete and total burnout. Pregnancy is exhausting. Dealing with a particularly needy friend. Your mother. Packing lunch in the morning. Watching CNN. Yes, pushing a boat of refugees to shore. Exhaustion is slippery. It is liminal, right there at the cusp of consciousness and blacking out, life and death, the superhuman and the totally mundane.

And so the piece pushes its way around these many exhaustions and feels out what connects them all. It spends most of its time with the mundane, and frankly, so do most of us. We spend a lot of time with totally ordinary feelings of tiredness. But what about those extraordinary exhaustions? I think about Ralph Lemon’s How Can You Stay in the House All Day and Not Go Anywhere?, where dancers throw themselves down and get back up, over and over again, for a painfully long period of time. I think about the greats of endurance performance — Burden, Abramovich, Ono. I think about Rankine’s onslaught of microaggressions in Citizen.

There are things to be really exhausted about in this world, and most of them don’t show up in while our blood’s still young. Instead, we get the specific bodies of Lindsey and Amanda . Slipping, bouncing, shaking, screaming, twitching, running. They are not crucifying themselves to the back of a car and why should they? They are two white women with jobs and college degrees. They are privileged, but their bodies still break when they ask it to do too much. One imagines that that Olympic swimmer from the refugee team, Yusra Mardini, felt pretty sore in the morning. Is that the connection between these two points?

There is an argument to be made that the contemporary experience is exhaustion. That the grind, the system, the march of capitalism, the pure experience of being alive every fucking day is exhausting. And in a strange way, I think that while our blood’s still young works because it refutes that argument.

Instead, it argues that, for most of us, we are not brave and we are not superhuman, but we are, in a tiny tiny way, running a marathon. Lindsey and Amanda don’t argue for complacency or self-pitying, but instead, a joyful recognition of that small feeling. Lindsey and Amanda exhaust themselves, but they keep going in celebration. There is more piece to go and so they continue performing. And a strange thing happens whenever they stop — I don’t believe them. Their performing bodies, to me at least, feel superhuman because the task isn’t finished.

But also, the cracks. Where their bodies give up a little. Slip, bounce, shake, twitch.

And that’s why this piece is interesting: because it is true. Because their bodies do ugly and weird things. Because it is funny. Because Lindsey and Amanda and Mac are disarming and wear their hearts on their sweaty, pasta covered sleeves. Because Donald Trump says that Hillary Clinton doesn’t have the stamina to be president. Because not long ago, most humans didn’t see past 35. Because some humans still don’t.

Because you, too, have a body, and it experience things every day and you, despite all of these things, continue to wake up, and shake, spit, bleed, twitch, and slip.

This thing — our blood being young growing old — isn’t solved by this performance. This isn’t a respite. And so what is?

Corey Smith is a composer, performer, and writer. coreyds.com

*while our blood’s still young will be performed again at: